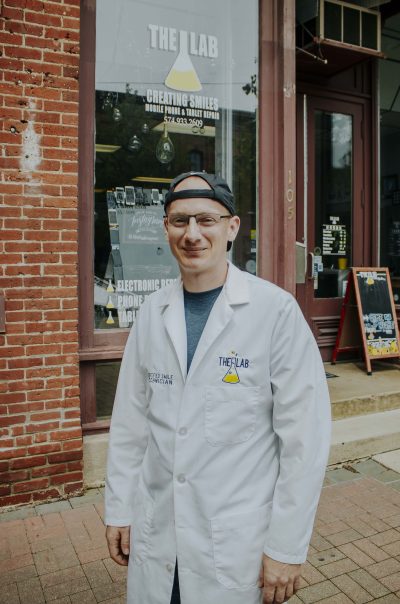 allenges that it gives me”

Lyle Schrock grew up in the New Paris area, but lived his childhood differently than most. Lyle grew up Amish, with little-to-no experience with technology. After hitting his teen years, he started to venture out into the world a bit more eventually decided not to return to his upbringing.

Lyle learned from his father that if something breaks, you fix it. So when Lyle dropped his phone one day, he did just that. After watching several YouTube videos about how to fix his phone, he went for it. Two screens later, Lyle had a new and working phone.

Sometime later, Lyle was talking with a friend about his new phone and the work that he did to repair it. His friend suggested that there was a huge need for phone repair in the area, and suggested that he put out a Facebook post advertising phone repair. Within a short amount of time, Lyle had nearly 40 responses asking for help with their phones.

Lyle set up a shop in Syracuse, where he could work on phones in a more professional setting and help people out with their repairs. He called it “The Lab”, after starting with the original name of “Creating Smiles.” He worked a full time job, came home from work, and went to his repair shop where he would spend his evenings. After a couple years, Lyle quit his job and went full-time to repairing phones. Around the same time, he connected with an old friend who worked at the Kosciusko Chamber of Commerce. Through her, Lyle was able to contact someone from the Warsaw area and move his shop to downtown Warsaw.

Lyle often has students come into his shop and help him out, and last year hired a full-time employee to help him keep up with business. Lyle admits that he never was really a tech person, but the real fulfillment he gets from his job is through the ability to help people. “There’s a lot of joy by helping people and the challenges that it gives me.”

Lyle loves working downtown because of the community he feels it has. Growing up Amish, a majority of his life was centered around being in community with other people and building relationships. Being downtown, he really feels like he gets a sense of community and belonging. Lyle also loves the lakes, and appreciates the many different options and “personalities” each lake has. Overall, Lyle desires to create a positive impact on the world hence the creating smiles through his business.