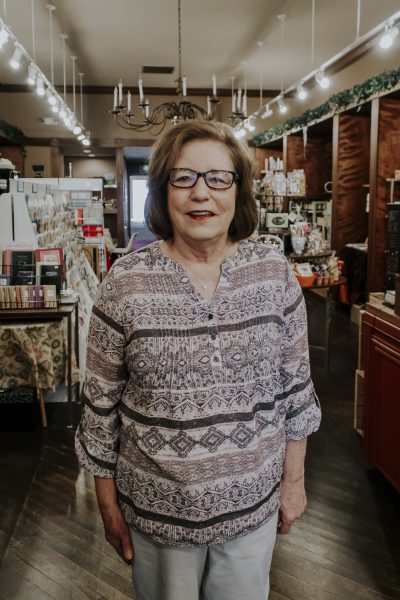 “I love my downtown neighbors.”

Cindy Dobbins had always been a “downtown girl.” She grew up in the Warsaw area helping her grandparents and parents in their office supply store, which was located in downtown Warsaw. She started working there as a young girl, and grew up in the business. As a young adult, she also worked at a dime store, taking care of the candy counter. She then taught English for six years and served in several management positions at Multi-Township Emergency Medical Service in Warsaw before her time as a downtown merchant.

In 2010, Cindy opened up her own office supply store in downtown Warsaw. While she had owned the building since 1998, she had rented the commercial space out to several other tenants. Starting in the office supply industry was natural to her, as she grew up knowing office supplies and the industry from her parents. She had not intended to expand her store to any more than that, and so she rented out the back of it for a bookstore.

A couple years later, the candy store went out of business, and so Cindy decided to take over and add candy and chocolates to her store. She later took over coffee when another store went out of business, and then took over the bookstore when her tenant decided to move on from the book industry. Now, Cindy successfully runs Buffalo Street Emporium selling anything from office supplies to coffee.

One aspect Cindy really loves about being located downtown in the neighbors she has. “I love my neighbors,” was one remark Cindy made about the other downtown merchants. She also loves to get personally know her customers, and has fun stocking products with specific people in mind. Cindy also loves to keep a section of Indiana goods, which includes many products made from local Hoosiers who sell to Cindy. She loves doing business locally, knowing that she is able to help support other local merchants in their businesses.

Cindy also serves on the Warsaw City Council and is a board member of the Warsaw Community Development Corporation. If you find yourself in downtown Warsaw, be sure to stop by Buffalo Street Emporium and see what Cindy has to offer!

We’re social, keep up to date on events and members.