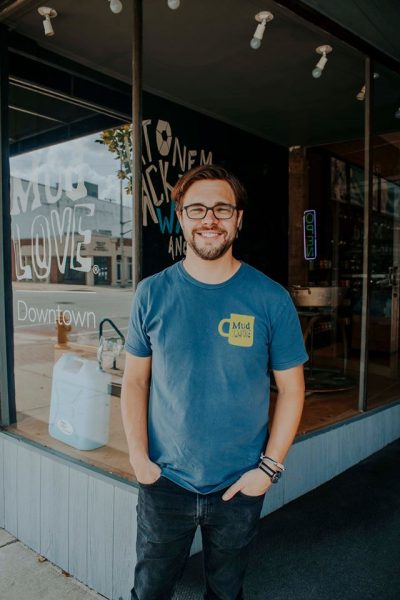 Meet Luke Wright! Luke grew up right here in Warsaw, Indiana. He fell in love with art at a young age when his elementary art teacher, Mrs. Brown, inspired him to explore his creativity. After losing his passion for art during the first few years of college, Luke rediscovered his love of creativity during his Junior year and decided to study ceramics. After graduating from college, Luke needed a way to make money, so he started working for his father’s construction business. Soon after, his father retired and Luke started looking for another job. Luke remembers applying to be a school bus driver but he ended up failing the test. It was after that moment that he decided he wanted to follow his passion for ceramics and turn it into a career. His friend had a space available in his basement and Luke decided to use it as his studio. In 2009, Luke moved his studio to a small garage in Winona Lake and started MudLOVE. The motivation behind starting MudLOVE was not only to earn a living and pursue his passion, but most importantly to help others in the community and around the world. MudLOVE quickly outgrew their small garage in Winona Lake and moved into their current location in Downtown Warsaw.

Luke loves being downtown because of the community, location and walkability. He also enjoys the action with all the events and restaurants downtown has to offer. The people in our downtown community mean a lot to Luke because they’re always there for him and want to help his business succeed. Another aspect about Warsaw that Luke especially appreciates is the fact that there is so much creativity that is beginning to surface in our community.

MudLOVE runs their business on the belief that you should pursue everything you do with love in action. They have done many things to help others locally and around the United States, such as gifting bracelets to schools that have experienced a tragedy. Additionally, they have also had a great impact on helping provide people in the Central African Republic with clean water. This idea first came about when Luke was talking to a non-profit organization, Water for Good and saw a connection between them and ceramics. Just like you need to have water to make clay, you also need water to live. Water for Good has become a huge part of MudLOVE’s mission over the years. With every product purchased from MudLOVE, customers are helping provide 1 week of safe drinking water to someone in the Central African Republic. Since MudLOVE was started in 2009, they have been able to give $450,000 to support the work of Water for Good. This means they have provided over half a million people with clean drinking water. MudLOVE has done many great things in the past ten years and is looking forward to doing even better things in the future.